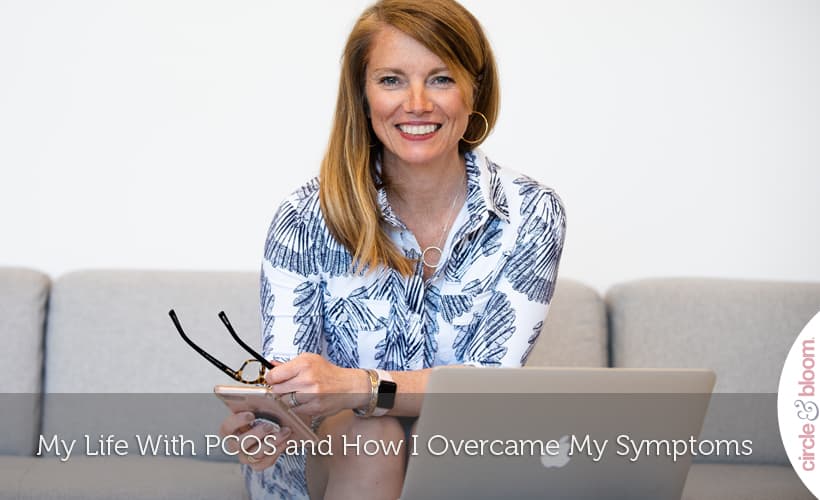 I started Circle + Bloom more than 11 years ago and, while I mention here and there that I have polycystic ovarian syndrome (PCOS), I hadn’t really told my full story.

Since September is PCOS Awareness Month, it seems like a good time to share my experience with PCOS and where my diagnosis stands today. (Hint: Today, my PCOS is completely gone!)

When I was in my late teens, my primary care doctor diagnosed me as one of the unfortunate 5 to 10 percent of American women with PCOS. Worldwide, the endocrine disorder affects up to one in five women.

If you’re not familiar with PCOS, it’s caused by a hormone imbalance related to high levels of testosterone and difficulty regulating insulin that comes with a slew of frustrating symptoms: weight gain, hair growth in unwanted places, acne, fatigue, irregular or missed periods, and more. Pretty much the opposite of what any teenage girl wants to deal with.

While I didn’t experience the weight gain that can occur with PCOS, I did have irregular periods and a lot of acne. My doctor also informed me that I may someday have difficulty getting pregnant.

I Was Lucky – Many Women Go Undiagnosed

The symptoms of PCOS can easily be attributed to other causes, or more mild ones can go unnoticed. Even though PCOS is one of the most common ovulatory disorders, accounting for 85 percent of ovulatory disorder cases, many women (as many as half of all cases) go undiagnosed.

In my case, the cysts were what led my doctor to my PCOS diagnosis. On an ultrasound, I was told that my ovaries looked like “swiss cheese.” (I’ve heard the appearance also described as a “string of pearls”.) The eggs don’t fully form and don’t release from the follicles – they just continue to sit there – causing the follicles to keep growing and to produce many cysts instead of healthy eggs.

The Cause of PCOS

No one knows yet exactly what causes PCOS. My mother had the beginning of ovarian cancer right after I was born, so in my own case, I wonder if that may be related.

Recently, a team of researchers from the French National Institute of Health and Medical Research found that PCOS may be caused by a hormonal imbalance before birth. They found that excess exposure in the womb to a hormone called anti-Müllerian hormone led mice to display many of the hallmarks of polycystic ovary syndrome. The finding has led to a cure for PCOS in mice, and a drug trial is set to begin in women later this year. (Read more in the article in New Scientist and the published study.)

How PCOS Impacted My Life

Even though I wasn’t even thinking about having children yet when I got my PCOS diagnosis, it was still an emotional hit. I wondered “What’s wrong with me?” As a twenty-something out in the dating world, I often carried in the back of my mind the fear that I might not be able to have a child someday. It’s hard enough to find “the right one” without that worry looming over your head!

There’s no medical cure for PCOS. No pill you can take to make your ovaries stop producing cysts and start pumping out healthy eggs.

So when I met and married my husband, we were thrilled that I became pregnant with our first child within six months of deciding to “try”. Unfortunately, having our second child was much more difficult.

We tried for years to conceive another child, unsuccessfully, and went through several early losses. I don’t know whether they were a result of my PCOS, although the disorder is characterized by a higher incidence of miscarriage.

It was a heartbreaking and desperate time, but eventually, we were blessed with our second child.

Our kids are now 17 and 12, and I have since built Circle + Bloom to offer help and support to other women and couples along their journey to parenthood.

Today, My PCOS is Gone

After that long lead up, it’s time for me to share where my PCOS stands today: I have no symptoms whatsoever. Call it cured, or healed, or in remission… but however its described, it’s simply gone.

I know this because I recently had an ultrasound. Due to my maternal history of ovarian cancer, I have regular scans to check for any signs of cancer. During my most recent appointment, I asked the doctor if she saw any signs of PCOS in my ultrasound. She said no.

There are no cysts in my ovaries today. No signs at all of the PCOS that plagued me from my late-teens into my thirties. I am also not currently experiencing any of the side effects of the disorder that I once did.

The biggest change I’ve made over the past few years is that I transitioned to a whole foods plant-based diet. I also have been using guided visualizations to help my body find balance, which I believe also helped.

A few years ago, I cut out most meat and dairy from my diet after reading The China Study and then watching the documentary “Forks Over Knives”. Both are fascinating for anyone who is interested in improving their own health with natural, food-based solutions.

Combined with daily meditation and guided visualizations, I feel so much better than I used to. I think more clearly. My energy levels have soared. And I have no signs of PCOS in my body.

While there is no study yet that I can point to that shows the clinical evidence of how a plant-based diet can impact PCOS, my own experience feels like strong anecdotal proof.

In my next post later this month, I’ll go a bit deeper into the changes I made to my diet, the recent research I’ve read that supports a connection between diet and PCOS, and how guided meditation has helped support my body’s changing health.

In honor of PCOS Awareness Month, we are giving a 25% discount on ALL of our Circle + Bloom programs, including the PCOS Fertility Program and the PCOS Program for Health (not focused on fertility). Enter coupon PCOS25 at checkout. (Expires 9/30/19)

I believe strongly in the power of the mind to change the body, and I hope it will help you in the same way it has helped me. 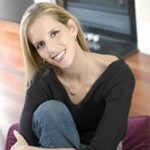 After a year and half of medical intervention, an operation to remove left fallopian tube, two failed IVFs, a chemical pregnancy and a horrific bout of OHSS, Leslie turns to Circle + Bloom’s IVF/IUI Mind + Body Program for help and gets pregnant. Here is her story: “When you’re trapped in the soul-crushing cycle of… Read more “IVF Success – Leslie’s story”